internal link   (use your browserbutton to go back)

The Rector of Alcester from 1843 to 1869 was Alfred Frederick Crow. His eldest daughter, Mary Elizabeth, was baptised at Saint Nicholas Church on Dec. 21st 1839. She would be almost 18 when in September 1857 she married George Frederick Jackson, a 30 year old widower, a 'yeoman' of Alcester Lodge. 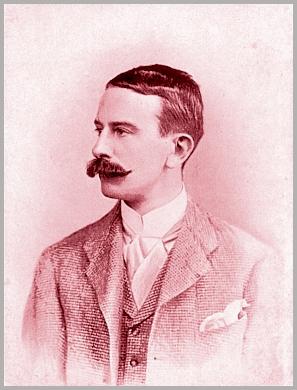 George Frederick and Mary Elizabeth called their eldest son Frederick George. He was born at Alcester Lodge and baptised in 1860. He was educated at Denstone College and Edinburgh University and he seems to have spent little time in Alcester after his childhood. However, his relatives still live in the area and his family was long established in Alcester and its immediate neighbourhood. His father, George Frederick, was baptised at Weethley in 1827, son of Samuel and Ann Jackson; Samuel had been baptised at Arrow in 1790, son of William Jackson and Ann Huband.

Frederick George Jackson was a great traveller and explorer. In the early he made a famous exploratory journey across the Great Tundra and Lapland in midwinter. In 1894 he obtained the support of Alfred Harmsworth, magazine proprietor, later to become Lord Northcliffe, in equipping an expedition to explore Franz-Joseph Land. This inhospitable frozen countrywas discovered in 1873, north of 80 deg. latitude and only its southern shores were known. F.G.J. took 6 companions to live there for 3 years, exploring and comprehensively mapping. His diary he reproduced as a book on his return: '1,000 days in the Arctic'.

This remarkable, sober, detailed account of 3 years exploration and well-ordered survival so impressed Amundsen that he filled two exercise books with notes from it to put to good use in future expeditions. Food was shot as required, walrus and polar bear, usually by Jackson himself, a crack shot. He took two companions on each of two epic sledge journeys from his base to the east and west of Franz-Joseph Land, carefully separating frozen sea from small islands in meticulous map making, showing that, contrary to previous belief, Franz-Joseph Land was not just a single land mass. Except for their ship 'Windward', which had to over-winter with them in 1894/5, return with supplies in '96 and to take them home in '97, they expected absolute solitude. In June, 1896, Jackson, at work in the hut, was disturbed by the incredible cry of 'There's a man on the ice'. Jackson himself went to meet a tall, filthy, greasy-bearded man, whom, despite his dishevelled appear ance, he thought he had seen before. 'Aren't you Nansen?', he asked. 'Yes, I am Nansen', was the reply. 'By Jove, I'm d...d glad to see you', said Jackson and Nansen wrote seized my hand and shook it again, while his whole face became one smile of welcome'.

In 1893 Nansen had sailed the 'Fran' deliberately into the Arctic ice, intending that the ship would drift with the ice across the Polar basin. In March 1895 Nansen and Lt. Johansen left the 'Fram' for a dash to the Pole. They failed but reached 86° 14' N,, furthest north so far. They then retreated over drifting pack ice for some 500 miles in an amazing journey of polar exploration. They had no idea of where the 'Fram' would be and hoped to reach Spitzbergen. They spent the winter of 95/6 in a makeshift hut of stones and walrus skins somewhere (they believed correctly) in Franz-Joseph Land. After another 100 miles between the islands and breaking ice in the spring they were about to attempt 200 miles of open arctic seas in kayaks 12' long, 2¼ wide, 1¼deep--- when they met Jackson. They were extremely fortunate.

While staying at Jackson's base Nansen was offered by Jackson the honour of naming the land he had lived on in his winter refuge. He thanked Jackson and said he would consider it. When Nansen's book 'Farthest North' was published, Jackson found that Nansen had accepted his offer and named the island 'Frederick Jackson Island'. There is no doubt of Nansen's gratitude; his chances of survival had been remote had he not met Jackson.

Jackson had been naming the various separate islands, as he discovered them, after members of the expedition, his sponsors and other explorers. He recorded on one sledge journey 'We are making for an island to the north, Mary Elizabeth Island, named by me after my mother! And so a tiny arctic island was named after a Rector of Alcester's daughter.

F.G.J. became a major in the East Surrey Regiment and fought with distinction in the Boer War and First World War. Afterwards, he travelled and explored in Africa, crossing from Beira to Banana Point (aged 65) hunting with pygmies, climbing Mt.Sabinyo, crossing the Congo forest, visiting the sources of the Congo, Nile and Zambesi and descending the length of the Congo. He married late in life, in 1929 when he was 69, a Mrs.Marguerite Wigan Fisher. He had no children.

Aged 75, he published 'The Lure of Unknown Lands' to join his other books, 'The Great Frozen Land', '1,000 days in the Arctic' and many articles and papers, including one on scurvy, based on his polar experiences. After his death in 1938 a brass plate was set into a communion rail at Alcester church reading: 'To the Glory of God and in loving memory of Major Frederick George Jackson, late East Surry Regiment, born at Alcester. Polar Discoverer, Explorer and Soldier. Commanded the Jackson Harmsworth Expedition in 1894-97, when he mapped in and named the greater part of Franz-Joseph Land and rescued Dr. Nansen who was lost. Passed to the Great Unknown March 13 1938 aged 78. Sans peur et sans reproche'

In 1926 Russia annexed Franz-Joseph Land. The island where Nansen's hut stood at 81° 13' N. and 55° 45'E was renamed: but 'Ostrov Dzheksona' is a recognisable Russianisation of 'Jackson Island', a tribute to a great pioneer of Arctic exploration who was born in Alcester 125 years ago.